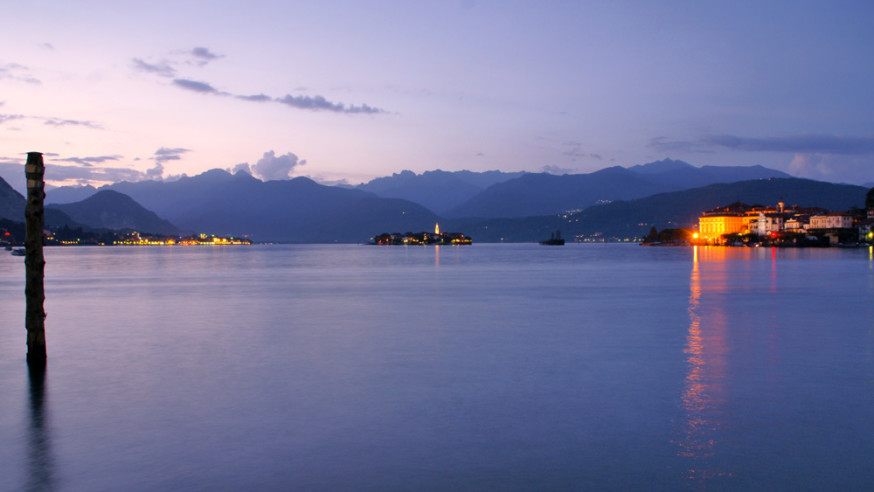 The Borromean Islands (It. Isole Borromee) are a group of three islands and two small islets, located on  Lago Maggiore, located in the western arm of the lake, between Verbania to the north and Stresa to the south. Together totalling just 50 acres in area, they are a major local tourist attraction for their picturesque setting.

The islands are owned by the Borromeo family, which started acquiring them in the early 16th century (Isola Madre) and still owns the majority of them (Isola Madre, Bella, San Giovanni) today.

Isola Bella, named for Isabella, countess Borromeo, was originally a rock; after first improvements and buildings,  started by count Carlo III between 1629 and 1652,  his son Vitaliano the 6th built an attractive summer palace, bringing in vast quantities of soil in order to build up a system of ten terraces for the Italian style garden.  Inside the Palace tthere  may painting displays and famous Flemish tapestries. In the gardens we have arranged evening aperitifs for corporate events.  On the island we can arrange for you and your guests Gala Dinners, Street partys and themed evenings.

Isola Madre, the largest of the three, is also noted for its gardens, which are maintained from about 1823 in an English style.  Its palace, though uninhabited, is splendidly furnished with 16th- to 19th-century Italian masterpieces and paintings.

Isola dei Pescatori or Isola Superiore is now the only inhabited island of the three, with restaurants overlooking the lake.  It is manly a fishing village, which in 1971 had a population of 208. If you are planning an event on the lake we can arrange gala dinners and dine arounds as well as themed dinners here.

Isolino di San Giovanni is located just off Pallanza , this is a private island. In Pallanza we often arrange firework displays.

The tiny uninhabited rock of Malghera, with an area of only 200 square meters, lies between Isola Bella and Isola dei Pescatori and offers bushy vegetation and a tiny beach.

The three islands can be visited by boat, with the explanation of a professional local guide in one day.

For an offer for lake tours, island tours, treasure hunts on the islands and evening dinners contact us at info@lakemaggiore.eu or call us on +39 0323 922 917 – we are fluent in English.