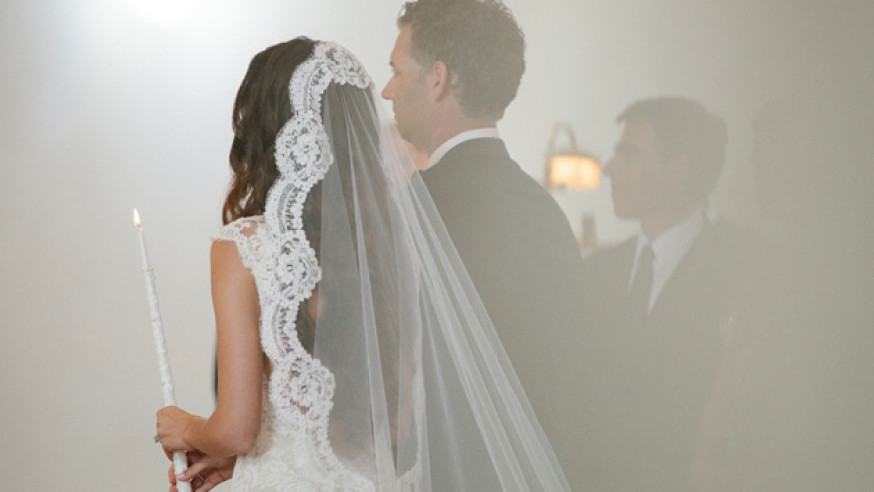 The Rite of Betrothal, in which rings are exchanged as a sign of commitment and devotion to one another.

The “Crowning,” in which crowns or wreaths [customs vary in each parish] are placed on or held above the heads of the bride and groom. This signifies that in marriage there is a certain amount of sacrifice, especially in the area of “give and take.” It also signifies that in a certain respect the bride and groom become the “king and queen” of their own “kingdom,” or family, which is an integral part of the Kingdom of God.

The sharing of a common cup of wine, which signifies that in marriage all things are shared equally.

The procession around the sacramental table, during which the priest leads the couple three times as they take their first steps together as husband and wife.

The removal of the crowns and the final blessing, in which all gathered wish the couple many years of blessings.

There are no “vows” in the Orthodox ritual, as found in other confessions.

The exchange of the rings, that has to be done 3 times meaning the Saint Trinity and the Crown for bridegroom. Again bridegroom will drink three times from the same holy glass and they will go around the ceremony table, the celebrant will lead them for their path for 3 times just like they are having their first steps as bride and groom.
At the end of the ceremony, there celebrant will take off the crown and he will bless them and all guests good wishes.

In Orthodox ceremonies, the bridegroom is honored by being called to read from the Torah (called an Aliyah) in the synagogue on the Sabbath before the wedding. This ceremony is called an Aufruf. In some synagogues, the women of the congregation throw candy and nuts at the bridegroom as he completes his recitation of the benedictions to wish the couple a sweet and fertile life.

The bride does not sign the Ketuba; it is read as part of the ceremony and given to her.

The ceremony only requires the man to give a ring to the woman, but many Rabbis allow a double-ring ceremony. During the ceremony, the ring will be placed on the bride’s right index finger, up to the second knuckle. This finger is chosen because it is said to go directly to the soul, and because it is used as the “pointer” when reading the Torah. The bride usually puts the ring on the left ring after the ceremony. When the bride gives a ring to the bridegroom during the ceremony, she will put it directly on his left ring finger.

Brides usually visit the mikvah (ritual bath) the morning of their wedding day (or as close to that day as possible) as an act of purification. Brides and bridegrooms are encouraged to fast on their wedding day until the ceremony.

Before the ceremony, the bridegroom may celebrate with his friends by eating and drinking items on a special table, called a chassans tisch.

We can arrange, private airport transfer, accommodation in a luxury hotel, fine dining on Lake Maggiore or in a Michelin restaurant on Lake Orta.

Lake Maggiore wedding planner, creativity and efficiency are at your disposal, to make your event on Lake Maggiore a success.

Lake Maggiore is only 1 hour away from Milan for shopping for your wedding attire!We provide wedding planning services and transfers from: Stresa, Baveno, Pallanza, Laveno, Ghiffa, Belgirate, Arona, Ascona, Locarno and Verbania