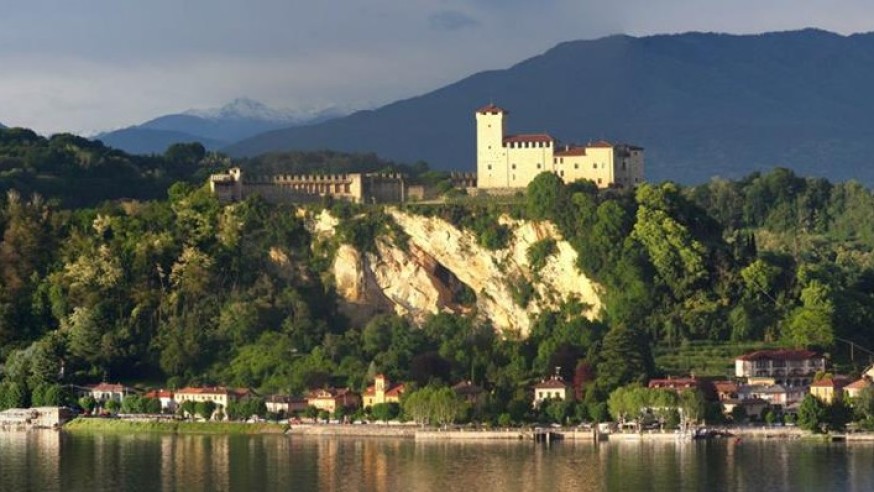 The Castle on Lake Maggiore , with its Medieval towers and crenellated walls surrounded by lush vineyards, rises majestically over the waters of Lake Maggiore. Its history begins around the thirteenth century and is initially linked to the Visconti family, an illustrious dynasty native of the area. At the time however, the castle was not the imposing structure it is today. It was built on the remains of an ancient Roman garrison and consisted of a large keep and a palace enclosed within boundary walls. Towards the end of the thirteenth century, important reconstruction work was carried out to enlarge and embellish the castle, and to improve it from a military point of view. Work continued on the building for more than a century. The Castle Lake Maggiore 1 would have remained in the hands of the Visconti family had Count Vitaliano I Borromeo not purchased it in 1449 from the Ambrosian Republic for the sum of 12,800 Imperial Lira.

Castle Lake Maggiore is a rare example of an entirely preserved Medieval fortified building that basically consists of five towers, which were each erected at various times in history. These are the Mastra tower (or keep), the Scaligera Wing, the Viscontea Wing (or Ottoniano Palace), the Tower of Giovanni Visconti and the Borromea Wing. Eight hundred years of history live on in the frescoed halls and enchanting rooms of this magnificent castle set in the tranquil Lombard countryside.

Four of the historic rooms, the terrace and the vat room are available for guests and can be used from March to October, at times when the Castle is normally closed to the public (from about 18.30 onwards).

Castle Lake Maggiore 1, with its inimitable style and magnificence, offers the opportunity to host prestigious events, personalized by an unmistakable touch of charm. The castle rooms can be used to host Medieval-style banquets, animated by period music and dances, or “rural” receptions with tasting of genuine local food and wine or even gala dinners, adorned with elegant furnishings and fittings.

On long summer evenings, the castle’s spacious exterior becomes the setting for unforgettable events that are rendered even more magical by the wonderful atmosphere created by the light of the torches and… the star-lit skies. The Castle’s position means that it is easy to organize transfers by ferryboat or shuttle bus to and from the main towns on the lake, all of which boast excellent accommodation facilities.


Lake Maggiore is an open-air museum, an oasis that lays just 50 minutes drive from Milan and 25 minutes from Malpensa international airport. Over the years, the enchanting atmosphere of the nearby Borromeo Islands has remained unchanged; there is Isola Bella with its seventeenth century palace and marvelous gardens inspired by a majestic ship, Isola Madre with its botanical garden and the prevailing scents and colours of Mediterranean and exotic flora from every corner of the globe, and Isola Pescatori with its tiny houses, narrow streets and picturesque views, where time seems to have stood still. From the lake to the mainland, the journey offers the chance to see enchanting towns such as Angera, Luino, Varese, Arona, Stresa and Baveno, all dominated by Mount Mottarone that soars above nearby Lake Orta, and Verbania and Cannobio. Visitors can enjoy spectacular panoramic views, beautiful architecture and a succession of historical parks and gardens that in spring are covered in camellias, azaleas and rhododendrons, Lake Maggiore’s precious flowers. However, Lake Maggiore is not just a land of breathtaking scenery. All of the accommodation facilities in the area have mastered the art of hospitality and have an exclusive style. They can also boast a tradition and professionalism that is well known and appreciated throughout the world.

In addition, we can also offer other exclusive activities and itineraries customized to your needs, to the size of the group, the season, the budget and the atmosphere of the event.

Lake Maggiore Destination Management Company, creativity and efficiency are at your disposal, to make your event on Lake Maggiore a success