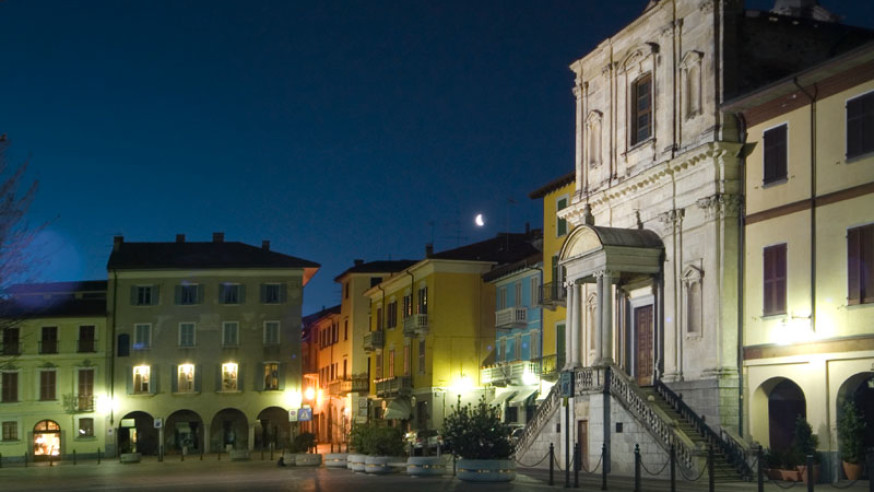 Arona (Aruna [aˈruna] in Western Lombard) is a town and comune on Lake Maggiore, in the province of Novara (northern Italy). Its main economic activity is tourism, especially from Milan, France and Germany.

Archaeological findings have shown that the area of what today is Arona was settled from the 18th–13th centuries BC. Later it was a possession of the Celts, the Romans and the Lombards.

In the 11th century the Benedictine abbey of Saints Gratianus and Felinus, Martyrs, was founded.

After the siege and destruction of Milan in 1162 by Emperor Frederick Barbarossa, many of the exiled took refuge in Arona.

Later the city was a possession of the Torriani and (from 1277) of the Visconti families. In the early 14th century the city became a free commune under the suzerainty of the abbey. In 1439 it was acquired by Vitaliano Borromeo and, as a result, the House of Borromeo.

The frazione of Mercurago is home to Lagoni Park, a protected area including a peat-bog, pastures dedicated to the breeding of thoroughbred horses and a woodland area. There are also some archeological findings from the Bronze Age, including ancient wheels.

Arona is 25 kilometres (16 miles) north of Milan’s Malpensa International Airport, actually closer than Milan itself. It is also connected to the railway network, being one of the main stops in the important link between Milan and Switzerland that passes Domodossola (another parallel link travels through Como). Arona is also the last station for two minor rail lines, connecting Arona to Novara and to Santhià; the latter uses single-car diesel trains.

Due to the town’s size there is no public transport, but some bus companies connect the city to its frazioni of Dagnente, Campagna, Mercurago and Montrigiasco, and to neighbouring municipalities.

Arona is near a confluence of motorways, and from there one can head for Milan, Genoa, and Gravellona Toce (where the motorway becomes a simple highway to Domodossola and continues into Switzerland). Whereas there is a motorway exit named after Arona, the exit at Castelletto Ticino is usually more convenient for the traveller coming from the direction of Milan.

The headquarters of the Navigazione del Lago Maggiore (Lake Maggiore’s ship transport company) are located in Arona, along with their shipyard. Arona is the southernmost port on Lake Maggiore, and transport by boat or hydrofoil is available to both sides of the lake up to the Swiss city of Locarno.

Arona is twinned with:

We can arrange, private evening transfer, accommodation in a luxury hotel, fine dining on Lake Maggiore or Lake Orta.